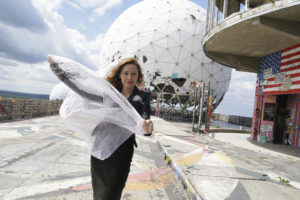 “Interception does not mean, they catch your inner thoughts and feelings. It means, there is no inside.”

We’ve all seen it in films. There is an interception risk. And a control issue. But when exactly did people come up with the idea that electromagnetic waves can record and control minds? Starting out from a technology that will probably have been invented and introduced by 2019 – brain wave recording and analysis over distance – we would like to follow its history. We will introduce 10 scenes, some film clips, a bit of theory and a lot of fiction at the intersections of inside and outside, brain and electricity, reason and society, culture and madness.

On the 28 of January 2017 Margarete Jahrmann and the writer and media theorist Marian Kaiser introduced 10 events into the Technopolitics TIMELINE for their transmediale show “New Paradigms” at the NGBK (full program below) Neue Gesellschaft für Bildende Kunst Berlin. In a performative lecture —reading a timeline from two opposing ends — from 1898 vs 2019 — was part of this live performed dialogue between the writer and the artist.

The result of the joint writing process was a text to a film fragment on the technohistory and speculations on brainreading, Neurospin and satellite waves. 12 filmsnippets were made by Margarete Jahrmann and the Swiss French filmmaker Samuel Dématraz in January 2017. The material was shot in locations throughout Europe, Swiss French satellite field Leuk/ Sion and at Teufelsberg Berlin in 2016/ 2017.

The event aimed to employ the TIMELINE as performative and fictional theory machine, rather than a representation of a definite media history.
“brainreading thought control” (work in progress) https://vimeo.com/202574242

For Tracing Information Society – a Timeline, TECHNOPOLITICS turns the exhibition venue into a curated knowledge space. A twelve-meter-long timeline depicts the development of the information society from 1900 until today. While moving along the timeline, visitors experience the emergence, transformation, and impact of the information society and the diverse influences on cultural, academic, or political events. This multidimensional framework sets the discusive pattern for the project’s orientation to critique and break down the neoliberal (dis)order of information.

TECHNOPOLITICS additionally provides an extensive collection of corresponding material in the time-table format, encouraging a deeper examination of the subject matter. The exhibition is accompanied by a series of workshops, lectures, and salons.