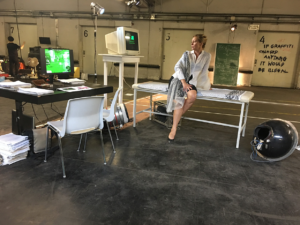 In this installation we use up-to-date elements of artificial intelligence: a standard Viola-Jones face detection algorithm finds faces (or what seem to be faces to it) in images taken by a webcam. A pre-trained deep learning network, the well-known AlexNet, classifies the detected and recorded images into categories. This artificial neural network with 23 layers of processing has been trained on 1.3 million images from 1000 different categories, from objects to animals. However, human faces, as recognized by the face detection algorithm, are not among the pre-trained categories and are thus classified by the network as objects or animals. A deep dreaming algorithm in the background iteratively modifies detected and recorded faces so that they are successively classified as various species of monkeys or apes. The results are displayed from time to time as memories from the past — the AI software’s memories of the visitors of the installation. 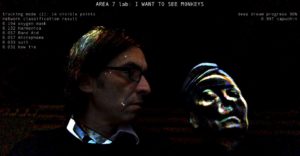 While to us humans the modified faces look like distorted but still clearly recognizable human faces, the network now identifies them as monkeys. The spectators become monkeys, involuntary test-subjects in the experimental setting of the installation, recorded in a database of artificial memories, observing themselves as mental imagery of the network. 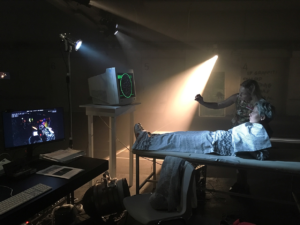 Artificial intelligence is also a crucial part of the second software element of the installation, an experiment called “Decision Demon”. It unfolds as a neuro-game, with similarities to radar control images and early Computerspace games, but representing inner space processes. It was played live on stage at experimental music theater piece Opera of Entropy (Jelinek/Sanchez) – with serious scientific evaluation of data and a collection of game scores as research outcomes: it displays science as game — and art as play! In the current version developed for the Ars Electronica the complete experiment is playing itself: a Bayesian optimal decision algorithm, designed after human performance, has taken over the role of the human participant. The experiment is evaluating and displaying its own results, starting the next level, simulating countless participants – in an endless feedback loop. Here, Maxwell’s demon has found its manifestation as artificial intelligence, perpetually sorting the dots drifting in and out of the screen space …

The area 7 lab installation consists of multiple further elements: artifacts from a neuroscience laboratory, data from functional brain imaging, and an experiment on the decision problem, as found in the theory of entropy in its thermodynamic understanding. It includes a mis-en-scène of scientific experimental systems, expressed by aesthetically transferred data of brain activity and research tools, such as an eye tracker goggle and a medical examination bed. The “datascarf”, wrapped over the bed, can be literally read. It is a silkscreen printed fabric of hexadecimal code from a functional brain scan. Personal neuroimaging data was applied in its design. In its haptic appearance, it was used for film sets and premiered in the Opera of Entropy. The installation is conceptualized as self-referential second order experiment. Each “observer” entering the space is immediately trapped by an optic flow detection – and involuntarily becomes an observed “subject” in a neuro-experiment: through a neural network face recognition, classification and the deep dreaming AI an endless circuit loop is triggered in I WANT TO SEE MONKEYS. 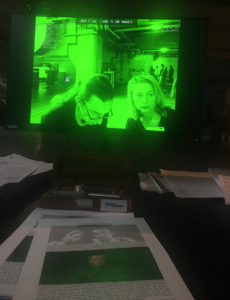 The neuroanatomist Brodmann proposed a brain map defined by cyto_architectonic regions. This historic concept is multifaceted but scientifically critical, however, artistically very appealing, because it opens a space for subjective differentiations and associations. 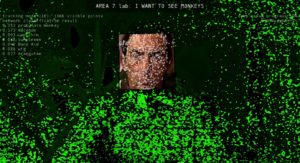 This installation appears as self-referential second order experiment, inspired by the concept of brain areas attributed to certain neural functions. It is metaphorically located in area 7, the multimodal association zone of the brain, following the neuroscientist Brodmann who introduced a mapping of the brain in zones. Accordingly the context of this installation is calling up numbered areas and zones in an entropy neuro-landscape. The concept of “zones” is multifaceted but scientifically critical, however, artistically very appealing, because it opens a space for subjective differentiations and associations.

Embedded in the context of an neg-entropic neuro-landscape, the arts experiment is set in a transferred neurolab, filled with cryptic artefacts. The performance play is divided into multiple numbered zones, which are inspired by the idea of brain areas attributed to certain neural functions. This neuro anatomic conception led to the research project name used for this work, area 7 lab.