At the occasion of the technopolitcs TIME LINE exhibition and workshop I had the opportunity to give a workshop and MINDREADING and to show the Filmfragement MINDREADING THOUGHTCONTROL in JUNE 2017 in Hongkong. Thank You Technopolitics working Group for this opportunity!

SubTEXT along the TIMELINE, 2017 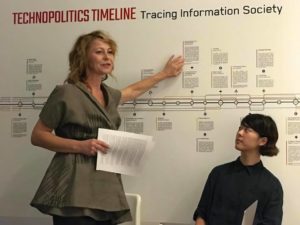 SCRIPT for a film fragment, inspired by the Technopolitics Timeline. Principle text with Marian Kaiser (Berlin):

Marcel Proust names his novel after the image of an interrupted wave inscribed on celluloid by Hermann von Helmholtz’ kymopgraph (“wave-scriber”) from 1848. Helmholtz writing apparatus, directly attached to the nervous body of a frog, measures the time an impulse needs to travel through nerves. The lost time in-between impulse and reaction becomes visible as an interruption in a wave. Helmholtz notes under the image the words “temps perdu”. Inside and outside collapse, time enters the body, nerve and mind functions are from now on measured in the register of time.

The French Alternative Energies and Atomic Energy Commission installed an 11.7 Tesla Magnet Resonance Imaging (MRI) scanner for mice and human brains at the NEUROSPIN Research center near Paris. In February 2019, this laboratory will have been the first to monitor and alter human brain waves over a distance of one kilometer, using a direct successor of the 2016 Bruker BioSpec System operating with 17.2 Tesla. The potential and political dimensions of functional brain scan analysis can be informed by media theoretical views on the meaning of our very inner personal data in networks.

The Swiss government sold their Satellite surveillance system ONYX and its surrounding satellite field near Sion/Leuk, in the center of Swiss alps, to the US company VERESTAR, who resold it later to the German company SIGNALHORN. Both rent the Satellite field to the NSA. ONYX is used to monitor international data transfer, using technologies mirroring the indirect reading of activities over time as found in the Bayesian decoder systems (Bayes’ Rule results in the simplified probabilistic characterization of neural decoding) used to interpret functional Magnet Resonance

The reconstruction of visual material was successfully undertaken by combining a functional Magnet Resonance Tomography (fMRI) scan of brain activities with a learning (AI) software model. In a spectacular experiment conducted by neuroscientists Jack Gallant and Shinji Nishimoto at the University of California in Berkeley, movies were reconstructed from memory. The project “Reconstructing Visual Experiences from Brain Activity Evoked by Natural Movies“ used Youtube data of online movies. Quantitative modeling of human brain activity can now form the basis for brain decoding devices.