Performance at the occasion of the episode NAURUTICA Synthetic Future Islands and the Tragedy of Outer Space, dramaturgy Marian Kaiser/ DE,  in the context of the Vienna Festival The Future of Demonstration

The film PRE_COGNITION: Self-Experiment in SPACE HABITAT was used as part of the episode and for the dramaturgic mis en scene of discourse, art and performance.
The Future of Demonstration S1 VERMÖGEN Episode 3
Recorded live stream, NOVEMBER 4, 20h

Quote from Naurutica: “The episode follows the glow of the strangest of all elements, Phosphorus, from its extraterrestrial origins via alchemistic experiments, bird excrements, pacific islands, colonial expansions and dietary geopolitics to the new subaquatic and outer space territories of capitalism. In collaboration between various artists, theoreticians, a designer, and a space station architect, the episode measures the distance between islands and planets, tragedy and transgression, future, fiction, and past. “A myth can only be told in the language of the myth.” 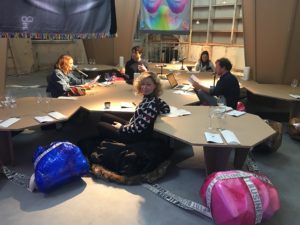 A 14 course PHOSPHATE dinner is served by the episode “NAURUTICA” live on stage – eating and thinking with a prominent line Up: