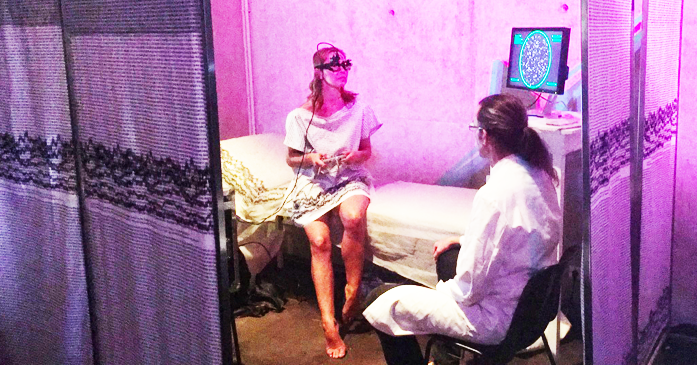 Ideas about the experimental system as hermeneutical surface in contemporary performing arts and game design and life sciences.

This LASERZurich will feature two renowned researchers that will cross pollinate their research by presenting their own collaborations.

Will introduce ideas about the experimental system as hermeneutical surface in contemporary performing arts and game design. She will critically question gamification as motivation design in scientific experiments in relation to the recent increase of functional brain scans, both in research as well as in life style medicine. The attributed speculative social meaning of such scans of the very personal “data” influences what appers as potential inscription about the human condition in the oxygene concentration of blood, flesh and neuronal fibres, based on the somewhat paradoxical blood oxygenation level dependent (BOLD) effect as the basis for functional fMRI imaging of brain activity (according to the UC San Diego Health Sciences Sites).

A better understanding of the potential political dimensions of functional brain scan analysis can be informed by a media theoretical view on the meaning of data in networks and the more or less negotiable effects of data interpretation for profiling issues applied to the scanned individual. Under this angle on the neurophysiological experiment using fMRI, EEG or Nearinfraredspectroskopy, the topic of surveillance must be addressed. Margarete will present fragments of her ongoing game art performances on the collapsing NSA communication scanning towers in Berlin Teufelsberg and on the very active Onyx Satellite field in the Swiss French Alpes. This field study will be presented in a preview of visual notes of these “memnosyne brainwave wave patho/s play performances”.

Will talk about experimental paradigms and situations used in human neuroscience and experimental psychology and will discuss what can or cannot be concluded from data acquired in such situations about human brain function and behavior. Experimental situations in science depend strongly on repeatability and happen in a reduced laboratory setting. They are thus distinct from many of the important real life situations, which only happen once, but in a rich environmental context. Important aspects of that context are missing in experiments, and many experimental paradigms are more comparable to games than to life. The desired repeatability has even led to several experimental results that have been discussed for more than a century but may only be side effects of the experimental situation. Stefan will give several examples from scientific practice and discuss their relation to games and art practice.

Stefan is a neuroscientist teaching and working at the Ludwig-Maximilians-University Munich. He is interested in general principles underlying perception, action, and sensorimotor control. After studying Electrical Engineering with a focus in cybernetics, he did his PhD at the Max-Planck-Institute for Behavioral Physiology on perception of gravity. Following a postdoctoral stay at the CNRS and College de France in Paris, he returned to Munich to coordinate the Center for Sensorimotor Research. He is founding member of the Munich Bernstein Center for Computational Neuroscience, member of the scientific boards of the Graduate School for Systemic Neurosciences and of the Munich Center for the Neurosciences, and member of the Center of Competence for Neural Engineering of the Technical University Munich. Recently, he lectured at the VOID book soirees by Jahrmann & Moswitzer, and collaborated with Jahrmann for their appearance at the Opera of Entropy in Vienna.

Margarete is an internationally renowned artist and researcher with a focus on critical media and game art. She holds a professorship for Game Design and was co-director of the New Media and Arts department at the University of the Arts Zurich and is senior lecturer Digital Arts at University of Applied Arts Vienna. She was awarded a distinction in interactive arts, Prix Ars Electronica 2003 and the software arts award transmediale Berlin 2004. 2006 she founded the Ludic Society and co-edited the Ludic Society magazine with Max Moswitzer. 2010 she was arts research fellow at the MIT Gambit Lab. 2013 she developed the Alternate Reality Exhibition “Play & Prosume” at Kunsthalle Vienna as outcome of a EU funded research project on the participative imperative and subliminal messages. 2016 she and Moswitzer presented the conceptual “VOID Book” in a series of play performance soirées at Cabaret Voltaire Zürich, ISEA Hongkong and co-developed with the neuroscientist S. Glasauer a 2nd order game installation at the Opera of Entropy in Vienna. Actually she is research fellow on Warburgs Memnosyne and Pathos Formulas at the Zentrum für Literatur- und Kulturforschung Berlin (ZfL).