An exemplary performance/neuroscience/arts collaboration was “Decision Demon” performed at “The Opera of Entropy”, director Jelinek/ music Sanchez, Vienna 2016: artist and scientist test as role-players. Further versions of this neuro-game experiment appear at ars electronica 2016 and in the space simulation habitat at the Vienna Media Festival 2017.Arts strategies applied in my work include media arts/film making, performance in formal setups, as experimental theater as well as game arts and topics of big data surveillance. Over the last two years the focus of my works was driven by the influence of neurosciences/biology and informed by self-observation, analysis of satellite and brain scanning data, scientific measurement and experiments. 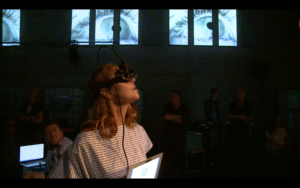 My work as artist and epistemologist in media and game design anchors in play as principle of agency and in game systems as basis for social, urban and research experiments.  I include videos of performances and Ludic pdfs.